From Okayama train station, you can take the bus to Chugoku Katsuyama Station, transfer to the community bus called "Maniwa-Kun", then step out of the bus at Hilzen Kogen Center.

I have arrived at Hiruzen Kogen Center. Surrounded by castle-like buildings of nature and the adjacent amusement park “Joyful Park”, just looking at them brings enjoyment to my heart.

A variety of souvenirs and original goods are sold at Hilzen Kogen Center. If you go there and take a quick look around before you leave, you will be able to purchase some delicious foods and wonderful souvenirs.

Hiruzen Kogen Center also holds a restaurant in the back of the center and they serve a variety of delicious meals. It would be a good idea to take a short rest here b\efore going to Joyful Park or Hiruzen Kogen area.

When visiting Hiruzen Kogen, you must try their special food, lamb barbecue called
“Genghis Khan” and Hiruzen fried noodles. The taste of their fried noodles are
nothing like the ones you eat from other regions and it might become your favorite one!

Across the street from the Hiruzen Kogen Center, there is a building called GREENable HIRUZEN. It is designed to maximize the beauty of the wood grain called "Wind Leaves".

Why not take a lot of pictures and show your friends how wonderful the of Japanese buildings are? 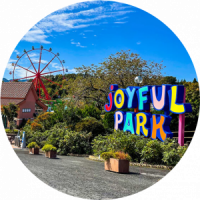 I went to the amusement park called “Joyful Park” located on the Hiruzen Plateau, in Okayama prefecture. It is located on the right side of Hiruzen Kogen Center, and you can get there by bus called “Maniwa-Kun” from Chugoku Katsuyama train station.

Joyful Park is a local amusement park surrounded by nature and located in the highlands. It opens from 10 a.m. to 5 p.m., and they have irregular holidays on every Tuesday and Wednesday, so check out the Joyful Park website before going there to see when the park is closed, and its admission fee and events.

There are many amusement attractions here, including a merry-go-round and roller coaster for everyone to enjoy.

It would be nice to have a break enjoying the beautiful views of Joyful Park and Hiruzen Plateau from the Ferris wheel.

They are holding an event called “Real Treasure Hunt” at this moment. A fun competitive event, where working together is the key to finding the treasure. Let’s go out and find that treasure!

And there are a lot of good old, Japanese retro game machines here. It feels as if you went back in time in old Japan, and you can get absorbed playing them.

For those who want to play pretty much everything/what is has to offer, I recommend the One-Day Pass called “Free Pass”, which gives you free reign of all the rides and amusement attractions.

Let’s have an exciting holiday in the amusement park located in the nature of Japan.

Providing information on the aspects of “Cool Okayama”
found in daily life and other recommendations
from the point of view of foreign residents of Okayama Prefecture.